Awards At The Texas Center For Superconductivity

Houston, TX - The Scholarship Committee for the Texas Center for Superconductivity at the University of Houston (TcSUH) is pleased to announce five TcSUH scholarship recipients for the 2021-2022 academic year. Students will be honored and presented certificates at a reception in the Fall, subject to UH COVID policies.

Scholarship recipients are selected from undergraduate or graduate students in research programs aligned with the Center, with selection based on the student’s academic and research accomplishments. While a high GPA is an essential factor, the committee considers the number of internal and external oral presentations, prizes and awards, number of papers, and other outstanding service or contributions.

The C. W. Chu Scholarships were established by multiple donors in recognition of the outstanding research of Professor Paul C. W. Chu and are awarded to talented students in the fields of physics, chemistry, or materials science. Two awards are being made for the 2021-2022 academic year, as follows. 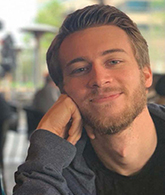 Trevor Bontke began his Ph.D. studies with a focus in condensed matter physics in Fall 2018 after graduating magna cum laude with Bachelor of Chemistry and Bachelor of Physics degrees from the University of North Texas, Denton. He received the University of Houston Presidential Scholarship in 2018 for two years and joined Professor Paul C. W. Chu’s group in 2019. He is developing and executing a technique envisioned by Prof. Chu to retain the high-pressure-induced superconducting phases in high-temperature superconductors without pressure. Although high pressure has long enabled high Tc, it becomes the most severe obstacle to the universal application of high-temperature superconductivity. All of the current record-high Tcs of high-temperature and room-temperature superconductors occur only under ultrahigh pressure, making any application impractical. Trevor has become particularly skilled in high-pressure techniques and has been heavily engaged in the successful demonstration of this Tc-retention concept, first in non-superconducting elemental Bi and currently in the high-temperature superconductor FeSe. Trevor will extend his study to higher Tc materials and eventually to the hydrides reported to display signs of Tc close to room temperature. After completing his Ph.D. work, Trevor hopes to remain in academia to investigate novel superconducting materials while working to discern their origin and that of other important condensed matter phenomena. 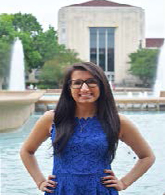 Shruti Hariyani joined the Chemistry department as an undergraduate student and began her Ph.D. studies in 2018 with Professor Jakoah Brgoch. She is investigating the local and average structure of oxide and mixed anionic phosphors. The most common LED-based light bulb available in stores today utilizes a blue InGaN LED and the yellow-emitting Y3Al5O12:Ce3+ phosphor. The combination of blue and yellow light appears white to the eye; however, these lights tend to have a notorious blue tint. Scientists have linked chronic exposure to the blue-tinted light from these bulbs to mood disorders and cataract formation. Shruti’s graduate thesis is on the development and advanced characterization of new phosphors that are compatible with violet LEDs to reduce the amount of blue light and produce a ‘human-centric’ light. In addition, she is focusing on utilizing experiment and computation to understand the effect of rare-earth substitution on the average and local structure of oxide and mixed anionic systems. She has 14 published or accepted papers, with four as the first or co-first author in journals such as Chemical Materials, ACS Applied Materials and Interfaces, and Applied Physics Letters. One publication received the Chemistry of Materials Lectureship and Best Paper Award by the American Chemical Society in 2021. She also has a patent pending on a novel blue-emitting fluorophosphate phosphor.

Mrs. Cora Hawley established scholarships to further the careers of exceptional students aligned with TcSUH research programs from the College of Natural Sciences and Mathematics and the Cullen College of Engineering. Three graduate students were selected for the 2021-2022 academic year. 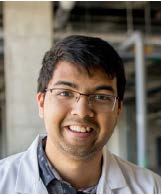 Faheem Ershad joined the Ph.D. program in biomedical engineering in 2018 after completing a B.S. in biomedical engineering with a minor in nanoengineering. In recognition of his undergraduate excellence, Faheem received the prestigious NSF Graduate Research Fellowship. Prof. Cunjiang Yu is his advisor. He has been investigating drawn-on-skin electronics for motion artifact-less sensing and point-ofcare treatment in one of his research projects. He has developed stretchable conductive and semiconducting inks for ballpoint pens and designed sensors directly on the skin. He also demonstrated an operational drawn-on-skin transistor as proof of concept. This work was reported or highlighted by >50 scientific and news outlets, such as Science Daily, Scientific American, Physics World, and EurekAlert. His paper was in the Top 50 Nature Communications chemistry and materials science articles published in 2020. Faheem also leads important work on the development of soft rubbery bioelectronics as medical implants for the heart. Rubbery bioelectronics can harmonically interface with soft human tissues and organs for sensing, diagnosis, prevention, and therapy. Faheem and co-workers developed a rubbery bioelectronic epicardial patch entirely made of materials with similar mechanical properties of heart tissue. The patch can provide multimodal sensing, actuation, and pacing functions while concurrently deforming with a beating heart, as a breakthrough in cardiac pacemakers. The device is the first-of-its-kind bioelectronics that seamlessly matches the properties of the soft tissues. This work was published in Nature Electronics and was reported or highlighted by >30 scientific and news outlets such as Science Daily, The Medical News, Medgadget, ScienMag, and Bioengineer. He has published 13 papers, with two in Nature Electronics, one in Nature Communications, and three in Science Advances. 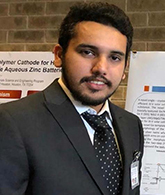 Sahil Sharma, a Ph.D. student in materials engineering, joined Prof. Venkat Selvamanickam’s group in Fall 2018 after completing his M.S. degree. His project is on flexible, inexpensive, high-efficiency gallium arsenide solar cells. Fabrication and testing of flexible gallium arsenide solar cells is a complex process that requires utmost care to ensure high-quality devices. Sahil learned and implemented the device fabrication process in a short time to demonstrate high-efficiency devices. He developed a microlens technique to achieve simple microconcentrators to increase ten-fold the power output of the flexible GaAs solar cells. He collaborated with Prof. Shih’s group in Electrical Engineering at the University of Houston to customize custom microlenses with the GaAs microcells, which was challenging. Flexible gallium arsenide solar cells with 10x the power output using microlens microconcentrator arrays can be utilized as roof-top solar cells to extend the driving range of electric cars. Sahil then developed an innovative method for exfoliation of gallium arsenide solar cells that enables re-use of the wafer substrate, which is the most expensive solar cell component. His method is based on a water soluble buffer layer which enables easy exfoliation, leaving behind a pristine wafer surface that does not require chemical mechanical polishing for re-use. UH filed a patent application, and the U.S. Department of Energy Solar Technologies Office (SETO) funded a proposal to fully demonstrate this method. Top researchers in the gallium arsenide solar cell field, including those from National Renewable Energy Laboratory (NREL) and a leading industry, expressed great interest in Sahil’s new technology. He is a coinventor on two patents in progress, “Compound Semiconductor Devices with Epitaxial Lift-off Architecture” and “Microstructuring GaAs Substrate Using Reverse-Patterning Lithography.” 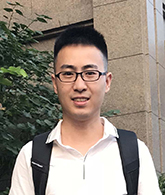 Libo Wu began his Ph.D. studies in the Materials Science and Engineering program in September 2018 with his own financial support. After the first semester of core courses in Materials Science, he became interested in Prof. Zhifeng Ren’s research project on water splitting through electrolysis, with joint advisor Prof. Alamgir Karim in Materials Science and Engineering. His research training began with searching for new and improved catalysts for freshwater splitting to generate hydrogen as an extremely high energy carrier. Water splitting involves two halfreactions, hydrogen evolution reaction (HER) and oxygen evolution reaction (OER), with HER always more efficient. For efficient water splitting, efficient catalysts for both HER and OER are needed. Through hard and persistent work, Libo quickly mastered the experimental skills and techniques on water splitting and discovered a few outstanding catalysts together with his senior lab peers. As there is much less freshwater than seawater on earth, he immediately turned his focus to seawater splitting. With the experience gained in freshwater studies, he explored and found novel catalysts for electrochemical seawater splitting. He has also been designing efficient catalysts for fuel cells and designing efficient catalysts for aqueous and flexible zinc air batteries. Libo’s initial efforts have led to seven outstanding papers in Energy & Environmental Science, ACS Energy Letters, Research, Journal of Materials Chemistry A, Advanced Functional Materials, Nano Energy, and Applied Catalysis B: Environmental. Of seven publications, he is the lead author on five.